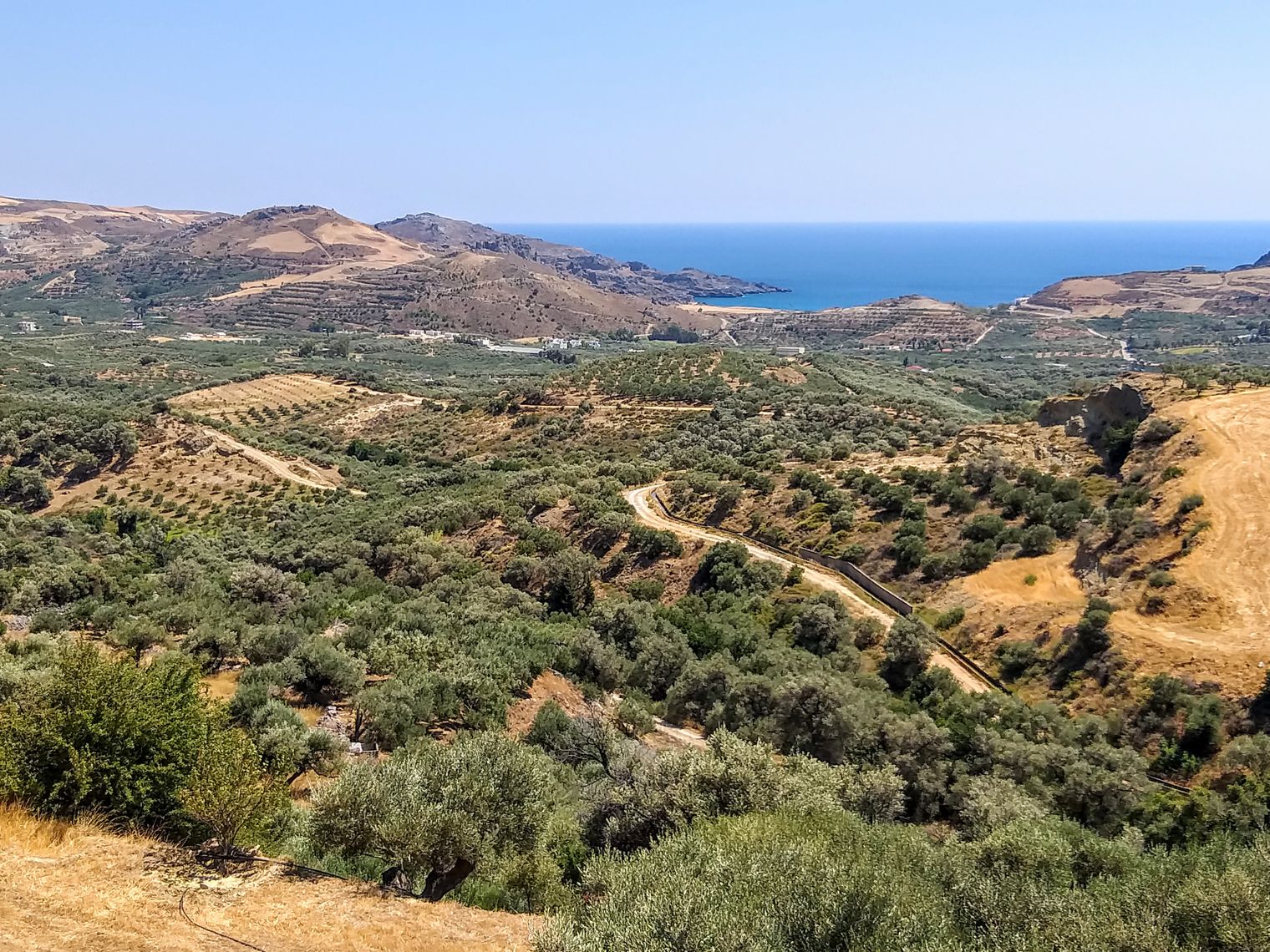 Everything You Need to Know about Olive Oil from Greece

Olives and olive oil are inseparable from the landscape, the cuisine and the traditions of Greece. Here we look at the main olive varieties as well as the place olive oil holds on the tables—and in the hearts—of the Greek people!

Greeks consume more olive oil per person than anyone else in the world. No wonder: in an average year, their small country produces the third largest amount of olive oil on earth (after Spain and Italy). Olive oil has played a central part in Greek history, culture, and cuisine for millennia, and it remains a key element in the famously healthy Greek Mediterranean diet.

Wild olive leaf fossils in Greece date back 23 million years, long before signs of humans. Olive oil traces from a more recent era suggest this oil was part of the Cretan diet about 6500 years ago. A few millennia later, the Minoans may have created the world’s first written records and art works featuring olive trees and olive oil. Fragments of olive pits, lamps, pieces of oil mills, and clay pots show that olive oil was central to Minoan life by 1700 BC.

In ancient Greece, olive oil was far more than a food: it was also a preservative, a medicine, a lubricant, a perfume, and an essential element in religious ceremonies (which it remains in the Greek Orthodox church to this day). Ancient Olympic athletes coated their bodies with olive oil and celebrated triumphs by wearing olive leaf wreaths on their heads. Champions at the Panathenaic Games won massive jars of olive oil.

More than 170 million olive trees now cover approximately 23% of the cultivated land in Greece, accounting for 79% of the country’s fruit orchards. Olives are grown throughout Greece, but the Peloponnese peninsula and the island of Crete account for about three quarters of Greek production. 81% of the cultivated olive trees produce olives used for their oil, while the remaining 19% yield table olives. Greek olive oil production has ranged from 132,000 to 435,000 metric tons annually in the last two decades.

The olives for most Greek olive oil are grown on small family farms. That small scale often enables the attention to detail necessary to achieve high quality, and increasing numbers of producers strive to combine excellent flavor with noteworthy health benefits. Many Greeks believe 70-80% of the olive oil produced in their country is the highest grade, extra virgin—possibly a larger proportion than in any other country.

The list below highlights a few of the most common Greek olive varieties. Even experts are reluctant to generalize about the flavor of the oil from specific olive varieties, because microclimates, cultivation practices, and the time and method of harvest, transportation, milling, and storage all influence the character of olive oil so much. Generalizations like those that follow are just that; individual oils can vary a lot.

Koroneiki
Approximately 60% of the olives grown in Greece are Koroneiki variety, partly because the fruit of this hardy tree tends to yield high quality oil. Especially common in Peloponnese and Crete, Koroneiki EVOO is generally well-balanced, with moderate fruitiness, bitterness, and spiciness. It may offer hints of fresh-cut grass, herbs, flowers, and artichokes, perhaps green almond, red fruits, olive leaves, and even notes of vanilla, nuts, basil, and citrus fruits.

Athinolia (Mastoidis)
Common in Laconia, southeast Peloponnese, Athinolia olives typically produce an aromatic, fruity oil which may have notes of banana, apple, and herbs or spices.

Tsounati (Mastoidis)
Cretans call Mastoidis olives Tsounati. When grown in Crete, they can yield oil with aromas of fresh-cut grass, herbs, and artichokes, and a slightly bitter taste.

Manaki
Found mainly in the eastern Peloponnese, Manaki olive oil may have a mild (or “sweet”) flavor with aromas of citrus or apple, tomato, and perhaps almonds, flowers, and/or herbs.

Kalamon (Kalamata)
Perhaps the most famous type of Greek olive is the large Kalamon variety, which is better known as Kalamata (from the name of a town in Greece where many of these olives are grown). Most often eaten as black table olives, they can also be used to make distinctive oil. (Note: olive oil with the Kalamata Protected Designation of Origin [PDO] certification comes from the Kalamata area but is made from Koroneiki olives.)

When should I use Greek olive oil?

All the time! Traditionally, Greeks have used olive oil in everything from cakes, cookies, and breads to meat, fish, and vegetable dishes. In fact, they have a whole category of foods designated “oily” (ladera)--with “oil” (ladi) always meaning olive oil. Of course, you can (and should) dip bread in it and use it on salads, but Greek extra virgin olive oil is perfect for much more. Experiment with different varieties and brands to find your favorite for each dish.

In marinades, dips and sauces: it can enrich your recipes.

In drinks and on sweets: add a surprising, invigorating twist to ice cream, chocolate mousse, and cocktails.

To sauté and fry: olive oil is actually more suitable for frying than other oils, in spite of myths to the contrary. Greeks have been frying with it for centuries.

For stews: an olive oil, tomato, onion, and garlic sauce forms the base for many Greek ladera dishes, from meat and chicken to peas, cauliflower, and pulses.

To bake: from savory pies and casseroles to desserts. Greeks have countless olive oil rich recipes for cheese, meat, and vegetable pies, as well as cakes and cookies.