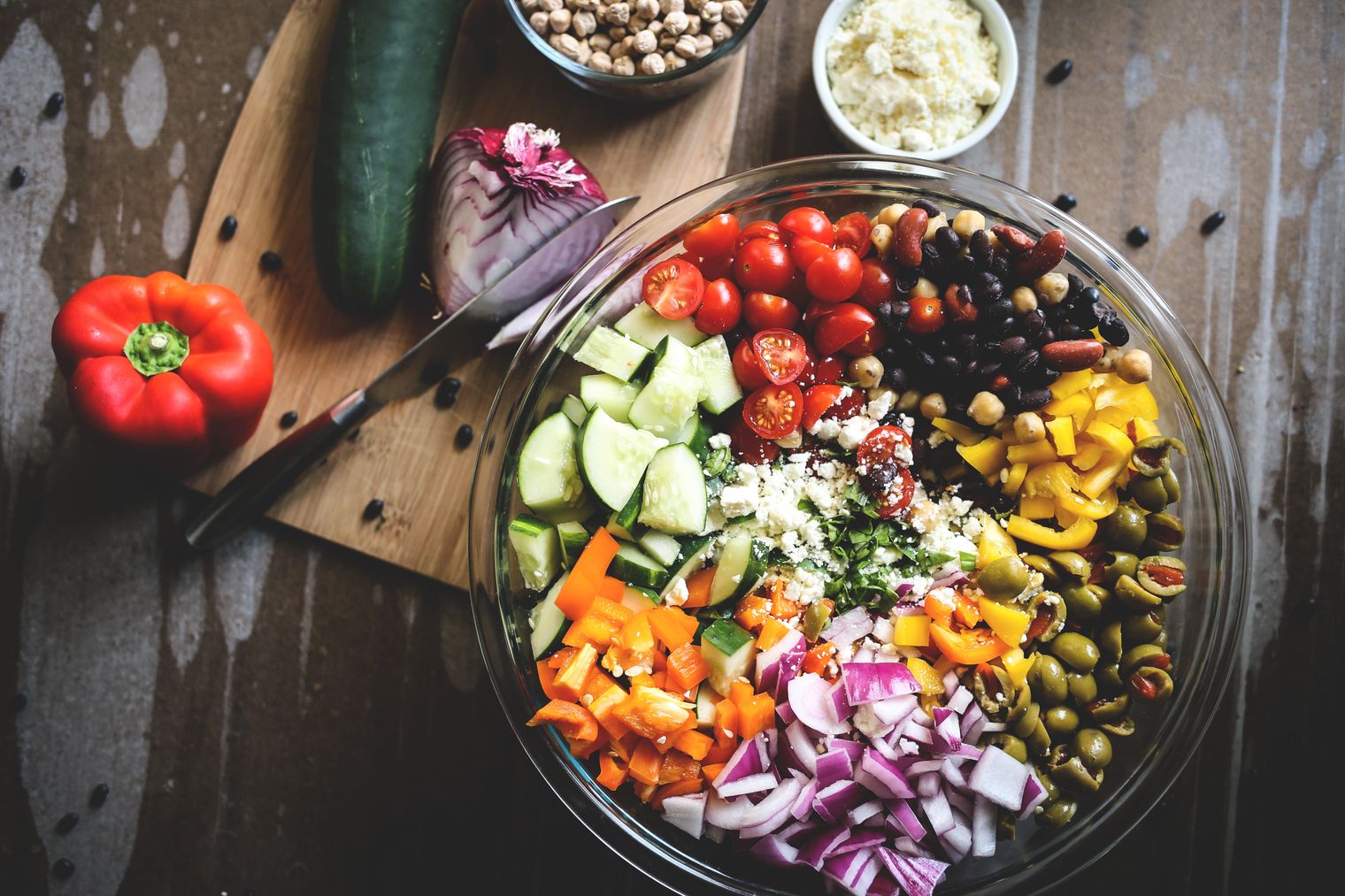 While fad diets come and go, the Mediterranean diet is here to stay. It consistently steals the #1 spot on U.S. News & World Report's list of best diets, and it’s a favorite among registered dietitians and other nutrition experts.

Part of the reason it’s so popular: It's more of a basic eating pattern than it is a structured diet—meaning, there aren’t rigid “yes” and “no” food lists, which makes it much easier to follow.

1. It may reduce risk of heart attack and stroke.

The positive impact of olive oil on cardiovascular disease and heart health has been well studied. In the landmark PREDIMED study published in the New England Journal of Medicine, which included over 7,000 adults in Spain, the participants consuming a Mediterranean diet supplemented with either mixed nuts or extra virgin olive oil (4+ tablespoons per day) had a significantly lower risk of a major cardiovascular event compared to those eating a low-fat diet.

The Mediterranean diet is even endorsed by the American Heart Association, as “this style of eating can play a big role in preventing heart disease and stroke and reducing risk factors such as obesity, diabetes, high cholesterol, and high blood pressure.”

2. It may help lower blood pressure.

In one 2019 study, older adults eating a Mediterranean diet for a year experienced, on average, a 5.5 mmHg drop in blood pressure. For men the results were even more impressive, with a drop of 9.2 mmHg. Participants also had reduced arterial stiffness, which is important for overall cardiovascular health and circulation.

Olive oil, which is a staple of Mediterranean diets, may be a major contributor to this drop in blood pressure, since it’s rich in anti-inflammatory bioactive polyphenols.

Several studies suggest that following a Mediterranean-style diet can optimize blood lipid levels and lead to modest-but-significant reductions in cholesterol. According to a review of the research, adherence to a Mediterranean diet has been shown to increase good HDL cholesterol levels up to 5% and decrease bad LDL cholesterol levels up to 10%. Triglyceride levels and oxidized LDL levels were also lowered in some studies.

Olive oil is the main source of added fat in the Mediterranean diet, and it contains high levels of monounsaturated fats and phytosterols—both of which have been independently associated with reductions in cholesterol, blood pressure, and inflammation. (Learn more about the beneficial bioactive compounds in olive oil here.)

With its emphasis on fiber-rich plant foods, lean proteins, and healthy fats—all of which are incredibly filling and packed with nutrition—it’s not surprising the Mediterranean diet has been associated with weight loss. In a two-year study, people following a Mediterranean-style diet lost almost twice as much weight as people following a low-fat diet. Those on the Mediterranean diet also ended up consuming more fiber and had the highest ratio of healthy monounsaturated fat (the kind found in olive oil) to saturated fat.

5. It could reduce Type 2 diabetes risk.

6. It may help with depression and anxiety.

The Mediterranean diet has serious mood-boosting benefits. In 2010, a groundbreaking study found that women who followed a diet very similar to a Mediterranean diet (high in vegetables, fruit, whole grains, and fish, and low in red meat) were less likely to have anxiety or depression than those who ate  a highly processed diet rich in added sugars and refined carbohydrates.

These findings were validated in the 2017 SMILES Trial, which showed that a 12-week Mediterranean diet intervention resulted in 30% of participants going into remission for their depression. And then in 2019, researchers found that young adults with depression who followed a Mediterranean-style diet (containing vegetables, fruit, whole grains, fish, lean meats, tofu, beans, and about 2 tablespoons of extra virgin olive oil per day) reduced depression symptoms to a “normal” range after 3 weeks, along with stress and anxiety.

7. It may lower risk of cancer.

A 2017 research review found that people living in the Mediterranean region had lower rates of cancer than the United States and Northern Europe, which the study authors credit to eating a Mediterranean diet, with its abundant vegetables, fruits, and other plant foods full of beneficial polyphenol antioxidant compounds.

Research has also found that extra virgin olive oil is absolutely brimming with bioactive compounds that have proven anti-cancer properties such as hydroxytyrosol, oleocanthal, oleic acid, phytosterols, and squalene. Oleic acid, specifically, may help suppress certain genes associated with breast cancer and cancers of the brain.

In 2019, the WHO even recommended following a Mediterranean diet to reduce risk of dementia, writing that “The Mediterranean diet is the most extensively studied dietary approach, in general as well as in relation to cognitive function.”

9. It may extend your lifespan.

In addition to curbing your risk of dying from a heart attack or stroke as mentioned above, the Mediterranean diet may boost longevity in another way. One study found that greater adherence to a Mediterranean diet was associated with longer telomeres—the end caps of your chromosomes that help protect against DNA damage. Telomere length has long been a biomarker for aging: Short, damaged telomeres are often associated with lower life expectancy and chronic disease, while longer telomeres are associated with health and longevity.

“We have about 2 kilograms of good and bad bacteria living in our gut,” said lead study author Hariom Yadav, Ph.D., in a press release. “If the bacteria are of a certain type and not properly balanced, our health can suffer. Our study showed that the good bacteria, primarily Lactobacillus, most of which are probiotic, were significantly increased in the Mediterranean diet group.”

This benefit could be due to the Mediterranean diet’s emphasis on eating a variety of plant-based foods: vegetables, fruits, nuts, seeds, olives, whole grains, legumes, lentils, etc. For the same study, researchers found that plant-based diets enhanced the good bacteria living in the gut by up to 7%.

11. It may help maintain muscle and bone mass.

Muscle and bone loss are one of those inevitable side effects of aging, especially for post-menopausal women who undergo hormonal changes that may exacerbate these processes. But they can be slowed down significantly if you maintain consistent exercise habits and optimize your diet.

One small 2018 study found that women whose diets most resembled a Mediterranean diet had greater muscle mass and higher bone density levels than those who didn’t. These results were true regardless of women’s activity levels and smoking habits, which makes them that much more exciting.

What to eat on a Mediterranean diet.

But to get you started, here’s a quick rundown of what you should eat, based on the Mediterranean diet food pyramid created by Oldways (which you can see here). Focus mainly on foods located in the base of the pyramid and work your way up!

Red wine —with a meal—is encouraged in moderation (moderation = up to 1 glass a day for women, 2 glasses a day for men), but it's not required to reap the health benefits.

The Mediterranean diet is the most studied diet on the planet and has been linked to impressive health benefits, from reduced risk of cancer and heart disease to improved mental health. It consistency ranks #1 among popular diets, and its emphasis on vegetables, fruits, nuts, seeds, fish, olive oil, herbs, spices, and more provides you with a wide range of nutrients that support overall health. Looking to get started with the Mediterranean diet? Check out our comprehensive Mediterranean diet guide.