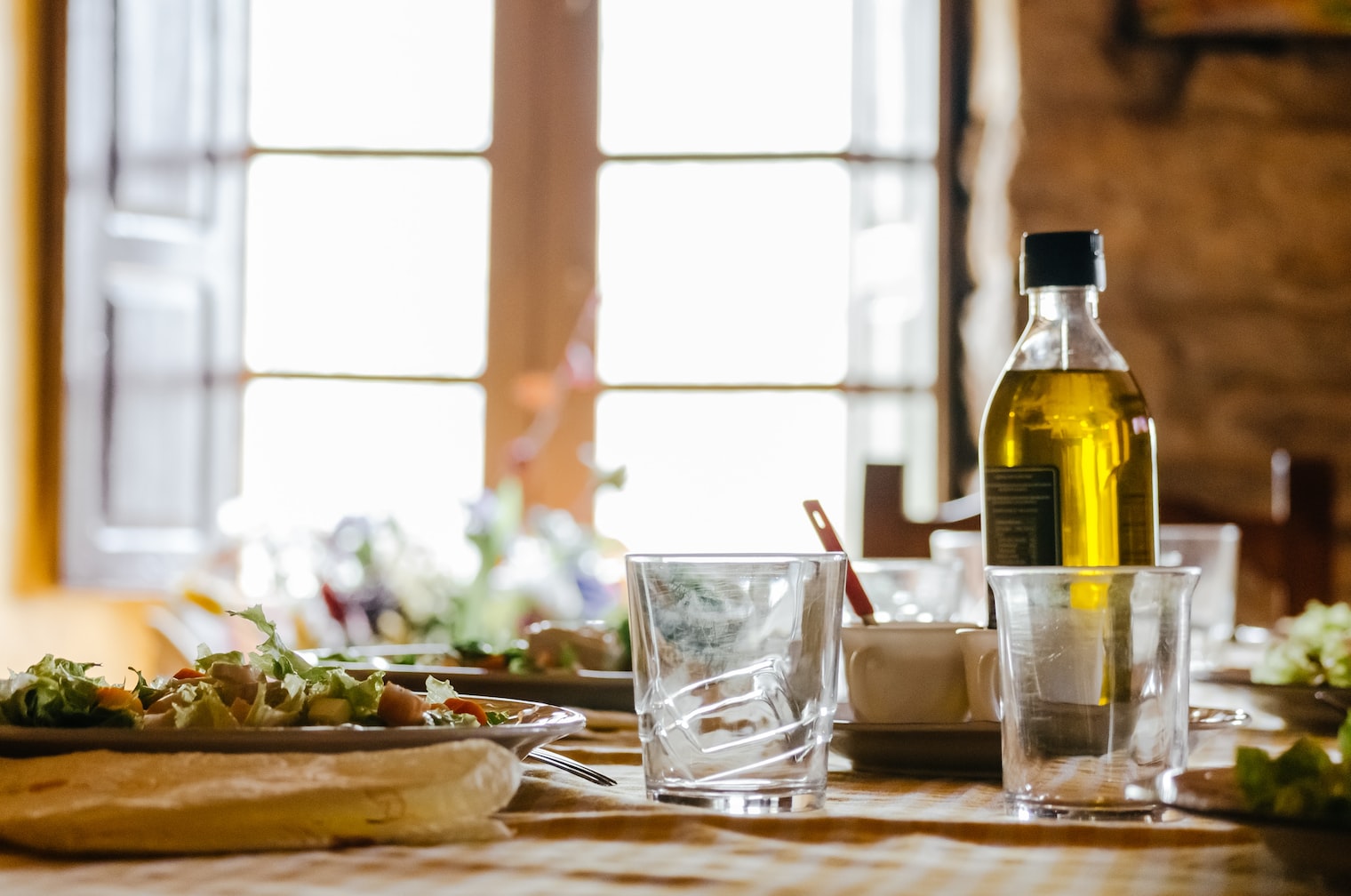 You already know that olive oil is both delicious and healthy. It spans a range of flavors depending on the olives used and when they were harvested—from robust, vegetal, and peppery to smooth, buttery, and subtly fruity—and it’s been associated with loads of health benefits. Plus, it’s safe to use for basically any cooking method.

But as far as other cooking oils go, choosing one that’s both healthy and right for your recipe can be downright confusing. Especially when some cooking oils that sound healthy (like, say, vegetable oil) are anything but.

One oil that periodically gets attention in the healthy eating and cooking space is grapeseed oil. Grapeseed oil has a relatively neutral taste and a high smoke point that some people say makes it good for a variety of cooking applications. But does grapeseed oil really deserve a spot in your pantry? And, while it sounds healthy enough, how does it stack up to olive oil?

Here, we break down the differences in nutrition, health benefits, taste, and culinary uses for olive oil and grapeseed, so you can decide which deserves a spot in your pantry.

Grapeseed oil & olive oil: How they are made

How is olive oil made?

In its simplest form, extra virgin olive oil and virgin olive oil is made by picking and washing the olives, grinding and mixing them into a uniform paste, separating the solids (or pomace) from the liquid oil, and filtering the oil. The oil is never exposed to chemicals or high heat during, so its flavors, aromas, and potent bioactive compounds like polyphenols are maintained.

Regular (or pure) olive oil and light olive oil are slightly more processed—they contain a blend of virgin olive oil and refined olive oil. The refined component has been treated with heat and various chemical agents to remove defects in flavor, aroma, and color.

How is grapeseed oil made?

Grapeseed oil is a byproduct of the wine industry—making it pretty sustainable, which is one of its best qualities. To produce it, the grape seeds leftover from wine production can be treated in two different ways:

When you first glance at the nutrition labels, olive oil and grapeseed oil may seem pretty similar. The main differences lie in the types of fats and the presence of micronutrients such as polyphenols and other antioxidants.

Olive oil is well known for its abundance of healthy monounsaturated fats, which have been linked to reduced inflammation and improved heart health. Specifically, olive oil’s fat content may be up to 83% oleic acid, a subtype of monounsaturated fat with anti-cancer and anti-inflammatory properties, and which has been shown to reduce “bad” LDL cholesterol.

High-quality olive oil also contains a variety of micronutrients and bioactive plant compounds such as polyphenol antioxidants (oleuropein, hydroxytyrosol, and oleocanthal), vitamin E, phytosterols, squalene, chlorophyll, and carotenoids that have been linked to reduced inflammation and lower cholesterol. These don’t get listed on the nutrition label, but they are most abundant in EVOO and present in smaller amounts in other types of olive oil.

One tablespoon of extra virgin olive oil contains the following, according to the USDA:

While omega-6 fats aren’t inherently “bad” (the body actually needs them), nutrition experts say that consuming more omega-6s than omega-3s in your diet may have a pro-inflammatory effect, since omega-6s are more prone to oxidation. Because modern diets contain high levels of PUFA omega-6 fats already (intake has almost tripled in the U.S. in the last 100 years with the advent of processed foods), using grapeseed oil in the majority of your home cooking will only drive that ratio further out of balance.

Grapeseed oil also lacks meaningful levels of micronutrients. Often, you’ll see people claiming that it contains proanthocyanidins, a beneficial antioxidant. However, while grape seed extract (which can be found in supplements) contains this compound, studies have shown that grapeseed oil does not.

Some research has shown that grapeseed oil may lower the inflammatory marker C-reactive protein and improve insulin resistance compared to sunflower oil, and that grapeseed oil reduces platelet aggregation (the tendency of blood to clot); but overall, grapeseed oil doesn’t have the robust body of research behind it that olive oil does.

One tablespoon of grapeseed oil contains the following, according to the USDA:

What’s the difference in taste?

The difference in taste between a high quality olive oil and grapeseed oil is pretty significant.

Extra virgin olive oil made with green, unripe olives picked early in the growing season often have more intense, vibrant flavors described as pungent, grassy, herbaceous, or peppery; while ripe olives picked later in the season yield a smoother, more buttery olive oil. Cooking with EVOO imbues a subtle olive oil flavor into your recipes, but pouring it over your finished dish after it comes off the heat releases the oil’s wonderful aromas even more. Regular, pure, or light olive oils have a more neutral, subtle olive flavor, making them great for recipes where you don’t necessarily want to taste the oil, like cookies or certain cakes (like this chocolate olive oil cake.)

Most grapeseed oil, on the other hand, is almost completely neutral in taste due to its higher levels of processing. If you seek out a less processed, expeller-pressed grapeseed oil, you’ll get some very mild fruity, nutty, and grassy notes.

Which is better for cooking?

Generally, if you’re looking to maximize flavor and health benefits, olive oil is your best bet for all types of cooking due to its high micronutrient content—even for frying, baking, and sauteing where you’re working with relatively high temperatures.

We get that this might surprise you. But contrary to popular belief, olive oil actually holds up well to high temperatures because it’s composed of mainly heat-stable monounsaturated fats. The abundance of polyphenols in EVOO helps it resist oxidation, too (research has shown EVOO is actually the most stable cooking oil for these reasons).

But what about grapeseed oil’s high smoke point, you ask? Smoke point is the temperature at which an oil stops shimmering and starts releasing a greyish-blue colored smoke, but it doesn’t always correlate to how stable a cooking oil is. Even though grapeseed oil has a relatively high smoke point (420⁰ F), its high concentration of polyunsaturated fats make it more prone to oxidation when heated. Plus, the smoke points of extra virgin olive oil (350-410⁰ F) and regular olive oil (470⁰ F) are relatively high anyway.

Grapeseed oil can still be enjoyed in moderation, though. It can be used in many of the same ways olive oil can (dressings, baked goods, sateing, light frying, etc), but it may be particularly useful if you’re looking for a very neutral oil that doesn’t affect the flavor of your final product. For this reason, it may be a good option when making baked goods, searing meats and other animal proteins, and making stir-fries with lots of other ingredients whose flavors can shine.

The one area grapeseed oil really shines over olive oil is for topical skin application. While olive oil can be used in your skincare regimen (e.g. as a makeup remover, dabbed over your moisturizer to lock in hydration, as a hair detangler), it’s not the top choice for all applications, as this article points out.

Olive oil is heavier and its larger molecules make it more likely to clog your pores, which means that anyone with acne should steer clear. Additionally, some studies have found that olive oil’s high concentration of oleic acid can be harmful to your skin’s natural protective barrier and promote irritation, particularly if you’re already prone to rosacea, dermatitis, or eczema.

Grapeseed oil, on the other hand, is a lightweight oil that penetrates the skin quickly, resulting in a smooth, soft, supple texture. It’s also non-comedogenic, or less likely to clog pores. That’s because grapeseed oil contains high levels of linoleic acid (a type of omega-6), which can help prevent the natural oils on your skin from becoming too thick and sticky.

For culinary purposes, olive oil is the clear winner in both the flavor and health categories when compared to grapeseed oil. While grapeseed oil may appear healthy given its low levels of saturated fats, it’s quite high in omega-6 polyunsaturated fats, which can promote inflammation (if consumed in excess) and oxidize more quickly under high-heat cooking. Grapeseed oil can still be used in moderation when you’re looking for a neutral cooking oil though, and it definitely deserves a spot in your skincare routine over olive oil.