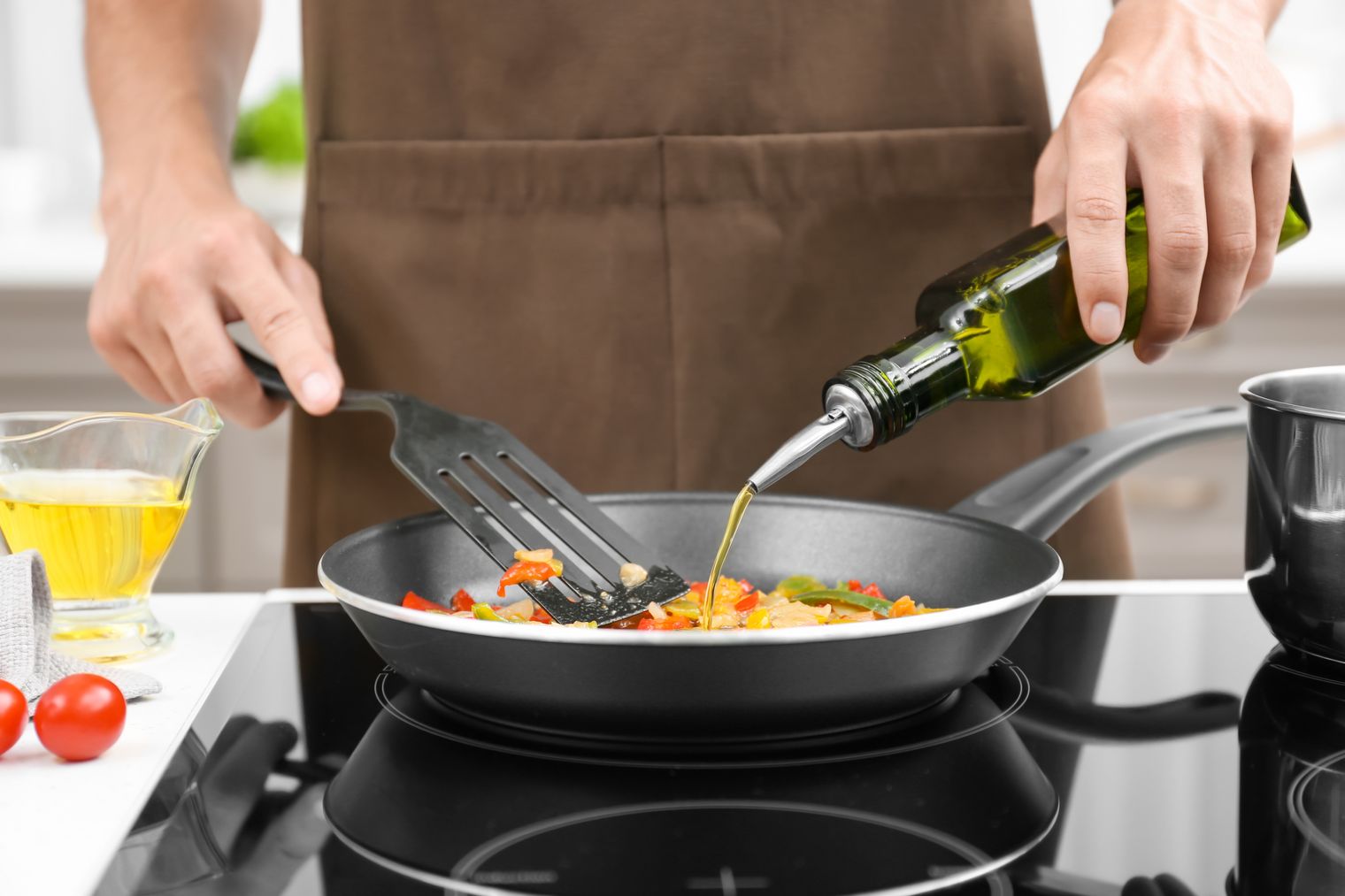 Can You Cook With Extra Virgin Olive Oil?

Outside of the Mediterranean region, there’s a huge misconception that you can’t cook with extra virgin olive oil. We’re here to set the record straight and tell you that, yes, you can definitely cook with EVOO!

In fact, research suggests that extra virgin olive oil is one of the healthiest oils to use for sautéing, baking, pan frying, and more—meaning, people in Italy, Spain, and Greece (who’ve been cooking with this liquid gold for thousands of years) have had the right idea all along.

Here’s all you need to know about the safety and logistics of cooking with extra virgin olive oil.

EVOO has a higher smoke point than you think.

In fact, most studies suggest that extra virgin olive oil’s smoke point ranges from 350⁰ to 410⁰ F, which encompasses most types of cooking. The reason EVOO has a smoke point range as opposed to a specific number is that smoke point depends on an oil’s free fatty acid (FFA) composition—the lower the acidity, the higher the smoke point. And according to the North American Olive Oil Association, the FFA for extra virgin olive oil can range from 0.2% up to the international standard limit of 0.8% (generally, higher quality olive oil has a lower acidity).

Some types of EVOO may have an even higher smoke point. A fresher, better quality oil may not start to smoke until around 425⁰ F, which is well above frying temperature.

For your reference, here are the smoke points of other common cooking oils. Beyond this point, flavor may start to degrade and you’ll probably have to open the windows in your kitchen!

EVOO is high in heat-shielding compounds.

Turns out, smoke point isn’t even the most important factor in predicting whether an oil will develop off flavors or unhealthy compounds when heated. What are the big things to consider? Two things: The predominant type of fat within an oil and the level of polyphenols.

A 2018 study in the ACTA Scientific Nutritional Health Journal tested a number of different cooking oils and found that extra virgin olive oil was the most stable cooking oil and produced the lowest quantity of harmful substances, outperforming oils with higher smoke points such as avocado oil and refined coconut oil.

For the study, researchers exposed the oils to high heat (465⁰ F) for a short time, then to moderate heat (356⁰ F) and determined their rate of degradation by measuring the number of polar compounds and oxidative byproducts, both of which may contribute to oxidative stress and neurodegenerative health conditions like Alzheimer’s.

Oils tended to degrade more if they were higher in polyunsaturated fatty acids (PUFAs). Case in point: High-PUFA grapeseed oil developed twice the harmful polar compounds as EVOO. Some other oils with a high percentage of polyunsaturated fats include soybean oil, safflower oil, corn oil, walnut oil, and vegetable oil.

Olive oil, on the other hand, is extremely high in monounsaturated fats, which are more heat-stable fats that are less prone to oxidation. Monounsaturated fats like oleic acid are also key to EVOO’s anti-inflammatory and cholesterol-lowering benefits.

But EVOO’s high percentage of MUFAs isn’t the only reason for its stability. In the ACTA study, EVOO performed much better than refined olive oil and canola oil, both of which are also rich in monounsaturated fats. So what’s the big difference that sets EVOO apart? Polyphenols, antioxidants like vitamin E, and other bioactive compounds.

“The polyphenols and antioxidants in particular are so plentiful in extra-virgin olive oil that they prevent oxidation in prolonged heating,” said Simon Poole, M.D., family physician and author of The Olive Oil Diet, in a recent article with Well+Good. Polyphenol compounds are produced by olive trees as a way to protect their olive fruit from the hot, dry climate and other environmental stressors, and it just so happens their protective benefits carry over into the kitchen.

Of course, EVOO that’s heated will lose some of its potent antioxidant health benefits, but it will still retain more than other cooking oils. It’s also a myth that cooking with olive oil leads to the development of dangerous trans fats—even studies in which olive oil was fried eight times in a row, trans fat levels only increased by a negligible 0.037%.

How to cook with EVOO.

Because of its moderate-to-high smoke point, abundance of heat-stable monounsaturated fats, and high levels of polyphenols and antioxidants, extra virgin olive oil is a great all-around cooking oil. It can be used for baking, roasting, sautéing, pan-frying, or even blending into soups for a bit of extra creaminess. Remember, EVOO is also fantastic for salad dressings, drizzling on finished dishes, and as a dipping oil for fresh bread.

Keep in mind: The best type of olive oil for cooking will also depend on the specific flavor you want in a dish. EVOO has a distinct flavor that can punch-up your average stir-fry or even baked goods (like this gluten-free lemon olive oil cake). But it may not complement all flavors. So if you’re going for a more subtle or neutral flavor, consider regular or light olive oil instead.

Olive oil can be substituted one-for-one in recipes calling for other types of oil. But when you’re replacing butter or margarine with olive oil, you will want to keep the conversions below in mind.

Butter to EVOO conversions for baking.

Forget what you’ve heard about extra virgin olive oil and cooking! It’s time to embrace your Mediterranean side. Not only is EVOO great for salad dressings, bread dipping, and using as a finishing oil, the scientific research suggests it’s perfectly safe, stable, and healthy to use in nearly all cooking applications. As long as you enjoy the flavor, you can use high-quality extra virgin olive oil for baking, roasting, sautéing, pan-frying, and more as a convenient way to get the maximum nutrition out of your meal.