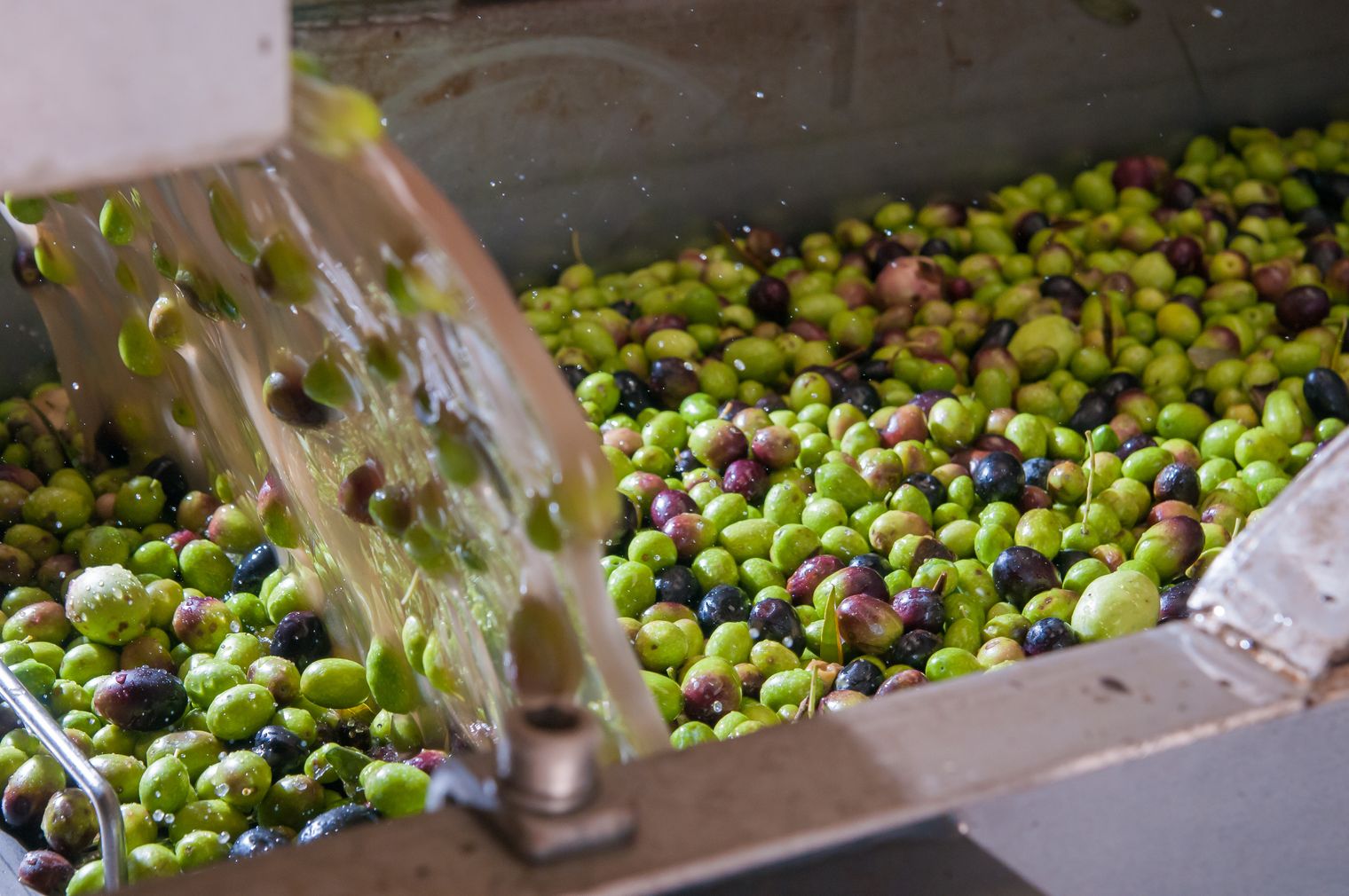 How Is Olive Oil Made?

Olive oil is one of the oldest, most celebrated foods on earth. In fact, this Mediterranean diet staple has been consumed for thousands of years and was particularly popular among ancient Greeks and Romans. But how did they obtain this liquid gold (which can actually be sort of greenish) from a bunch of fresh olives? And how is most olive oil made today?

Starting way back in the 5th-4th Century BCE (so, well over 2,000 years ago), olive oil was made by grinding and crushing fresh olives into a paste or slurry using stone mills of various types. To separate the oil from the pulp, pits, and other solids (collectively referred to as “pomace”) the paste was “placed into woven bags or baskets, and the baskets themselves were then pressed,” according to this ThoughtCo article on ancient olive oil production. Hot water would be poured over the pressed bags to wash out the remaining oil.

As the olives were pressed, the liquid was typically drained into a stone settling tank where the oil would rise to the top and separate from any remaining water and particles. The olive oil would then be skimmed off the top and stored in terracotta pots for later use in cooking, medicines, religious ceremonies, and more.

How is virgin olive oil made today?

The top olive oil-producing countries are (unsurprisingly) all in the Mediterranean region: Spain, Greece, Italy, Tunisia, and Portugal. However, the state of California, with a similar climate to the Mediterranean, produces around 4 million gallons per year. In each of these places, most modern virgin olive oil making involves the following steps:

1. Picking and cleaning the olives.

The first step in making olive oil is—surprise, surprise—harvesting the olives. Typically, when making extra virgin olive oil, olives are harvested in the green (immature) fruit ripeness phase, or in the “veraison” phase when olives are just transitioning from green to purple-ish in color, which means they're just beginning to ripen. Riper olives can also be used to make extra virgin olive oil, they just produce a milder ripe-fruity style oil with a lower polyphenol content.

When growers decide they are ready, olives may be picked mechanically by shakers or over-the-row harvesters, or by hand with the help of various tools that rake or shake olives onto nets underneath the olive tree. Once picked, olives are loaded onto a truck and transported quickly to a production facility. Delay between harvest and processing results in lower quality olive oil as the olives—like any fresh fruit—deteriorate after picking. At the mill they go through a defoliator to remove any leaves, twigs, or stems in the batch of olives. Then, the olives are washed to remove dirt, pesticides, and other debris. Next, they're ready for processing.

*Fun fact: The ancient Greeks believed that the earlier the olives were harvested and pressed, the finer the oil, according to Ancient History Encyclopedia. And they were kind of right—extra virgin olive oil made from unripe olives is thought to have the highest concentration of antioxidants and other bioactive compounds compared to oils made from fully mature olives. This also means EVOO packs the most health benefits.

2. Extracting the olive oil from the olive fruit.

Now the fun part starts! After the olives are washed, they undergo an extraction process that grinds them up and separates the olive oil from the olive pomace. Keep in mind, regulations require that virgin olive oil only undergo mechanical (or physical) extraction—never solvent extraction or extreme heat.

Grinding is the crushing of the olive fruit—pits and all—into a thick paste that sort of resembles cooked oatmeal in appearance and texture (except it's green or purple). This process can be done by several different sorts of machines. Some olive oil makers still use traditional millstones powered by motors, but these are being phased out in favor of machines that crush and grind the olives with stainless steel hammers, knives or disks. These newer milling machines cause less oxidation of the paste and are easier to clean, which means a healthier, higher quality olive oil in the end.

After grinding, the olive paste goes into a malaxer—basically, a stainless steel trough with a corkscrew shaped mixer turning along the bottom. This machine slowly stirs the olive paste, which allows the tiny microdroplets of oil to coalesce into larger drops of oil that are easier to extract. This is also the site of a lot of biochemical activity that creates flavors and aromas in an olive oil. This process typically lasts about 20-40 minutes and is carried out under carefully controlled temperatures and atmospheric conditions.

The olive paste is then run through a horizontal centrifuge (called a decanter) to separate the olive oil from the water and solids. Decanters have largely replaced presses, so the term “cold press” or “cold-pressed” oil doesn’t really mean anything today. Now, it’s essentially a marketing term used to describe oil that’s been extracted without the use of heat or chemicals. In other words, extra virgin olive oil. After the decanter, the oil passes through a second higher speed centrifuge to remove the last remaining water and particles. Exiting this vertical centrifuge is extra virgin olive oil—ready to use as "olio nuovo" ("new oil") if you so desire!

3. Racking or filtering the olive oil.

After processing, the extra virgin olive oil can be finished by either filtration or racking. Although still a topic of debate among producers, filtration is becoming the preferred method for high-quality extra virgin olive oils. In racking, the oil is allowed to rest in a series of large stainless steel drums or tanks to allow any final bits of water and sediment to settle onto the bottom of the tanks so the clean oil can be pumped to a fresh tank. This is usually done several times until the oil is clear.

4. Testing and bottling the olive oil.

While not technically part of the olive oil making process, olive oil needs to pass several tests before it can be called extra virgin olive oil—considered the gold-standard. For example, the oil must undergo a chemical analyses to make sure it meets numerous chemical parameters including a free fatty acid content (a.k.a. free acidity level) of 0.8% or less. There is also a battery of tests for authenticity/purity that olive oils need to be able to pass. Then, it must undergo a sensory analysis in which a panel of trained tasters looks for any flaws in flavor and aroma. If there are no defects, and some fruitiness, it can be bottled and sold as extra virgin olive oil; if there are very minor flavor defects or slightly increased acidity, it may be bottled as virgin grade olive oil.

Extra virgin and virgin olive oils pack the most health benefits since they retain a very high percentage of their antioxidants due to their minimal processing compared to other olive oils. And extra virgin olive oil is the flavor star: fresh and fabulous tasting.

However, if a mechanically extracted olive oil has significant flavor defects, a free acidity of more than 3.3%, or otherwise breaks quality regulations for extra or virgin virgin grade olive oil set forth by the International Olive Oil Council, then it will be categorized as lampante oil, which is considered not fit for human consumption because of its objectionable odor and taste. Typically, lampante olive oil is a result of poor processing and production methods or bad fruit.

Lampante oil must be refined with heat and various chemical agents to remove imperfections and be fit for human consumption. This refined olive oil must be mixed with virgin or extra virgin olive oil before it is sold, or it may be used in (non-culinary) industrial settings.

How are other types of olive oil made?

Regular olive oil (a.k.a. pure olive oil) and light olive oil are from a different category than the virgin olive oils. These oils are blends of a small amount of virgin or extra virgin olive oil and refined olive oil, which is olive oil that’s undergone significant treatment with heat and various chemicals.

While the initial olive milling process may be similar (although temperatures in the processing might be cranked up to improve extraction), the steps in creating refined olive oil are quite different. They involve using substances like alkali, activated carbon and high heat or steam to rid the olive oil of any flaws in flavor and aroma. Olive oil that didn't make the cut as “extra virgin” or “virgin,” i.e. lampante oil, is used to make refined olive oil.

Another highly processed oil is olive pomace oil. Basically, manufacturers take the leftover pomace (the solid waste obtained after the extraction process, including pits, skin, and flesh of olives) and extract the 1%-5% of oil that’s left in the pomace using hexane. They then refine it with heat and chemicals to obtain a refined pomace oil. It is blended with a small amount of virgin or extra virgin olive oil for sale. Because of its extensive processing, pomace is low-quality oil and often used in industrial settings, but rarely in the kitchen.

The answer to “how is olive oil made?” is relatively nuanced, but at its core, production of high quality olive oil involves: picking and washing the olives, grinding and mixing them into a uniform paste, separating the olive fruit solids and water from the oil in a centrifuge, removing the last bits of sediment and water in a vertical centrifuge, and finally, filtering or racking, testing and bottling. Any processing and refinement beyond these basic steps typically results in a lower quality, less flavorful oil with fewer health benefits.