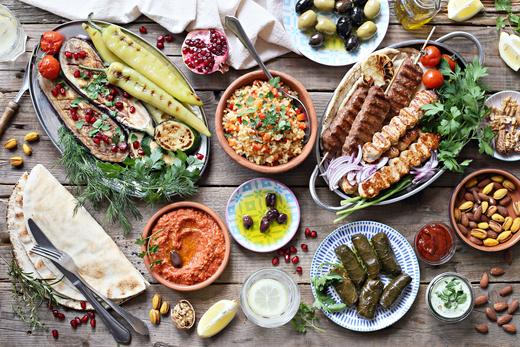 Mediterranean Diet vs Paleo: How Do They Compare?

If you’re seeking a healthier way of eating, you might have come across these two popular plans: the Mediterranean diet and the Paleo diet. Maybe you have friends raving about them. Maybe you see them popping up on social media, or gracing covers at your local bookstore.

But how do they compare? Both popular diets claim to have health benefits, including weight loss. Which is more sustainable? Which, if any, is right for you? In this story, we size up the Mediterranean and Paleo diets.

What is the Mediterranean diet?

While people have been eating this way for centuries, of course, the popular diet plan as we know it gained acclaim in the 1960s. At this time, researchers observed that people in countries that border the Mediterranean Sea, like Greece, Croatia, and Italy, have fewer deaths by heart disease than in the United States and northern Europe.

According to the Mayo Clinic, studies suggested that the Mediterranean diet does reduce a person’s risk for cardiovascular diseases.

What can you eat on a Mediterranean diet?

While there is not one single definition of the Mediterranean diet, there are some general principles. Here are the most essential elements of the diet.

Here’s a sample meal plan on the Mediterranean diet:

Snack: A handful of almonds or pistachios

Lunch: Lentil salad with lots of veggies and an olive oil-based vinaigrette

Snack: Hummus and veggies or a small bowl of olives

Dinner: Roasted fish and vegetables with an arugula salad with a glass of red wine

Dessert: Greek yogurt with fruit and a drizzle of honey

What foods do you avoid on a Mediterranean diet?

What is the Paleo diet?

The Paleo diet, also known as the caveman diet, is based on a far older American eating pattern: the way ancient humans might have eaten in the Paleolithic era, approximately 2.5 million to 10,000 years ago.

This concept of this diet is a return to the way humans were meant to eat. In this thinking, the human body was built to thrive on the hunter/gatherer way of eating. Modern farming has quickly changed the way people eat, making grains, dairy, and legumes staples in our diet.

According to the Paleo diet’s discordance hypothesis, our farming practices have outpaced evolution and our bodies haven’t been able to catch up. Proponents believe that this has “discordance” has led to today’s problems of obesity and heart disease.

What can you eat on the Paleo diet?

Here’s what you can eat on the Paleo diet.

Here’s a sample meal plan of healthy eating habits on the Paleo diet:

What foods do you avoid on the Paleo diet?

Mediterranean Diet vs Paleo: How are they similar?

As you can see, there are a number of similarities between the two diet plans. There are some key differences, too. Here, we compare the Mediterranean and Paleo diets to see where they align and where they differ.

According to the U.S. Department of Agriculture (USDA), processed food is any food that has gone a change from its natural state. That means any cleaning, cutting, pasteurizing, freezing, canning, etc. By that definition, of course, not all processed food is bad for you.

Both the Mediterranean and Paleo diets avoid heavily processed foods, like bacon, potato chips, packaged ramen, sugary desserts, sodas, etc. Many health professionals agree that these foods should be avoided, as they contain hidden sodium, sugars, fats, and preservatives.

Eating lots of fruits and veggies

In both diets, eating more fruits and veggies are encouraged. The Paleo diet, however, does not permit starchy vegetables, like potatoes and corn. The Mediterranean diet does include potatoes in moderation. While potatoes do contain more starch and carbohydrates, they also contain healthy vitamins and minerals like potassium and Vitamin C.

The Mediterranean and the Paleo diet both include olive oil, as it has healthy fats that promote cardiovascular health, cognitive health, cancer prevention, and more. (Read more about the science-backed health benefits of olive oil here.)

On the Paleo diet, healthy oils are allowed but more limited. Olive oil is on the list of approved oils, along with coconut oil and walnut oil. On the Mediterranean diet, however, olive oil is an essential element that is encouraged.

What are the health benefits of a Mediterranean diet?

As cited in the Harvard Medical School blog, studies have convincingly shown that the Mediterranean diet has measurable health benefits. Here are some of the benefits.

What are the health benefits of a Paleo diet?

According to the Mayo Clinic, there have been a number of clinical trials that tested the Paleo diet vs the Mediterranean diet and other diets. When compared with a diet that includes fruits, legumes, vegetables, lean meats, whole grains, and low-fat dairy products, some benefits were shown. Keep in mind that long-term trials with larger groups have yet to be carried out.

The skinny on Mediterranean diet vs Paleo diet

While studies of the Mediterranean diet and the Paleo diet have reported health benefits, there are some key differences to consider.

The Paleo diet has more restrictions than the Mediterranean diet. As such, it may be harder to follow the Paleo diet for the long term. With such strict limits on carbs, cravings may cause you to veer off course. And once you fall off the wagon, it can be hard to get back on.

The Mediterranean diet, however, is more of a lifestyle, with a wider variety of foods that are less restrictive. More than a list of what to eat and what to avoid, the Mediterranean diet values human connection and celebrating food. Lingering over meals with friends and family – perhaps with a glass of red wine in hand – is encouraged.