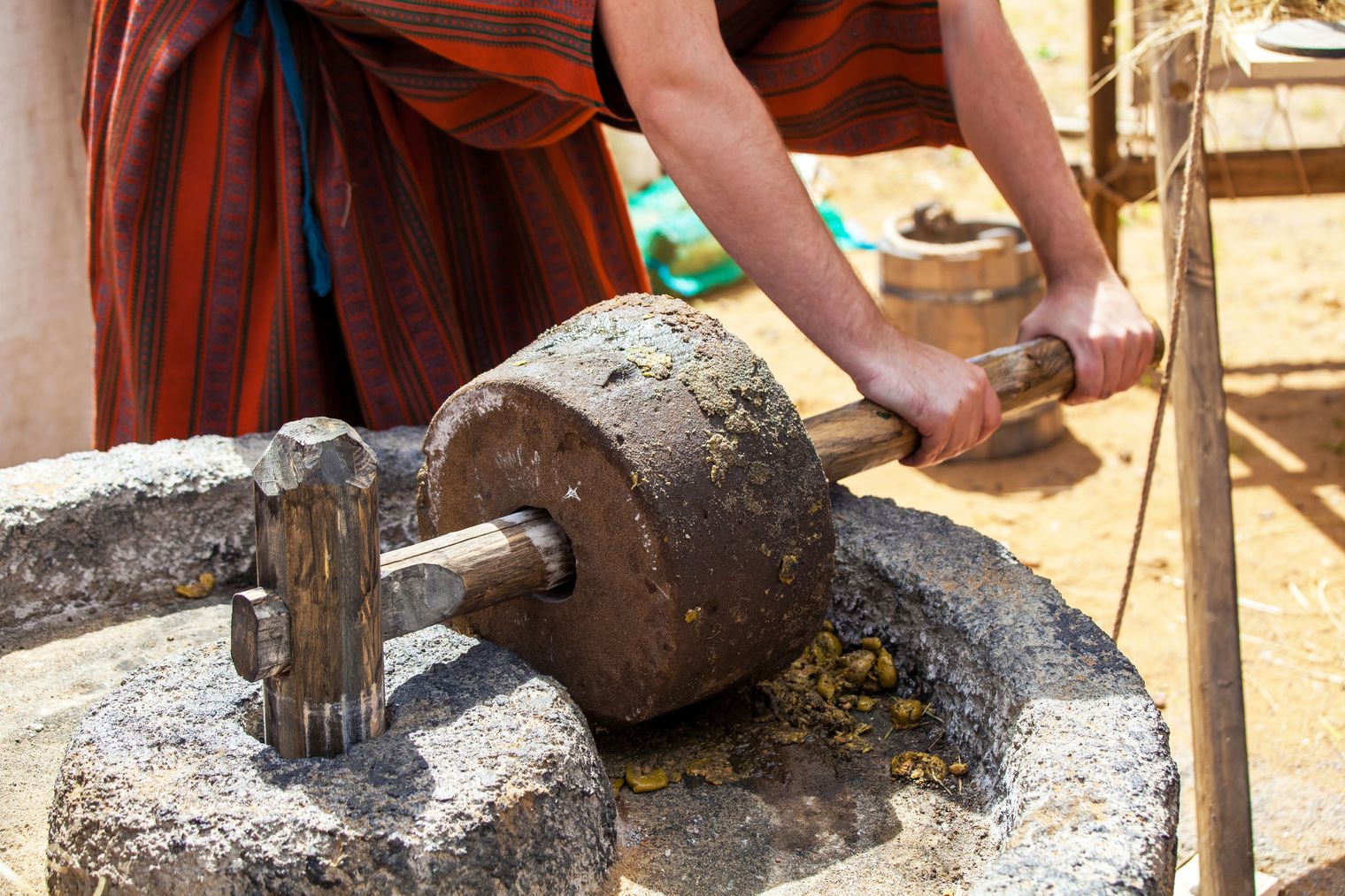 What Is the History of Olive Oil?

Olive oil is a buzzed-about “superfood” today, but we aren’t the only ones singing its praises. In fact, ancient people in the Mediterranean basin had another designation they preferred: they believed olive trees were sent by the gods. The legend goes that when the city of Athens was founded, the goddess Athena created the olive tree so that they would choose her as their patron, rather than the god Poseidon.

Can you blame the ancient Greeks for believing these trees were godly? These trees produced a delicious bounty of fruit each year, which could be used for eating, lighting lamps, cosmetics, medicine, and more.

In Greece, they thanked the Greek gods for their olive cultivation. Aristaeus, the God of Olive Growth, was praised for protecting the olive groves. In Judaism, olives are believed to be one of the seven fruits that Israel was blessed with. (Read more about Israeli olive oil here.)

In fact, there is a mitzvah for bringing olives, as well as the other fruits, to the Holy Temple in Jerusalem. There’s also a special blessing to say when one eats these fruits.

While we may never know if olive trees were a gift from the gods, we do know quite a bit about their early days. Here’s a deep dive into the history of olive oil.

According to a 2007 article by Paul Vossen of University of California Cooperative Extension, the precise origin of the olive tree is unclear. While we think of the olive as a product of Mediterranean countries, researchers speculate that the wild olive originated in Syria, or potentially sub-Saharan Africa.

Of course, the Mediterranean is where the olive tree thrived. Researchers believe that olives were first domesticated in the Mediterranean region approximately 6,000 - 8,000 years ago. According to Thought Co., olive trees might have been so attractive because of the oil – not just the fruit.

According to Haaretz, “What species of olive cannot be known; archaeologists have sharply differing opinions about that, let alone when the olive became known and used in the Levant.”

As Dr. Ianir Milevski of the Israel Antiquities Authority, who was part of the dig, told Haaretz, the find proves that olive oil was being produced 8,000 years ago. In fact, the ancient extracts have a strong resemblance to modern-day olive oil.

Researchers believe that the spread of olive oil was likely happening at the same time as the vegetative propagation (reproducing a plant by cutting or grafting rather than seeds) of other plants, including wine grapes, figs, and date palms.

Olive trees are not easy to propagate by seed, as the juvenile phase is so long. It takes about 10-16 years for an olive tree to bear fruit. What’s more, the offspring also bear little resemblance to the mother tree.

As with today, the earliest agriculturalists likely selected for the trees that bore fruit early and produced ample yields.

What else were they likely looking for? Trees that grow in arid areas, on poor soils, and are easy to harvest would have all been attractive. From there, the trees made their journey to the west.

The Trade of Olive Trees

Olive oil was an important export of Mycenaean Greece (c. 1450–1150 BCE) when they frequently traded with the Phoenicians and even parts of North Africa. Researchers believe that at this time, olives were placed in woven mats and squeezed to extract oil. This process continued – and was also used by the Egyptians – through the Hellenistic period.

As said by Pliny the Elder, Italy had "excellent olive oil at reasonable prices" by the 1st century AD. He went so far as to call Italian olive oil the “best in the Mediterranean.”

While olive oil was used for food preparations, of course, it was also used in religious ceremonies, medicines, and more. Here are a few ancient examples of the use of olive oil.

Olive Oil Production: How It’s Made

By the 5th century AD, Romans and Greeks were using more sophisticated methods to produce olive oil. They invented different types of olive press including the trapetum, a large olive press that’s somewhat like a mortar and pestle.

According to Thought Co., “These machines were all similar and used levers and counterweights to increase the pressure on the baskets, to extract as much oil as possible. Traditional presses can generate up to 50 gallons (200 liters) of oil and 120 gal (450 li) of amurca [byproduct of olive production] from one ton of olives.”

Interestingly enough, the traditional ways of making olive oil have not changed much since the early days, even as the plants have made their way to the new world.

In the past, all olives were hand-harvested. Today, some producers still hand-pick their olives, as some terrain is more challenging for machines to navigate. More often, producers use a machine that shakes the trees so the olives fall onto a net or catch frame below.

This is a faster method – approximately four times faster – than hand-picking olives. As olive oil is best when the olives are pressed immediately after harvest, this allows producers to quickly move from the harvest to pressing phase.

While the technology is more sophisticated, the concept is the same: the oil is mechanically extracted from the olives. As the tempartures are carefully controlled during production, these olive oils remain packed with health benefits. That is why EVOO is the finest olive oil available for purchase.

To taste the oils of the ancients, always reach for a high-quality EVOO. Isn’t there something just divine about it?