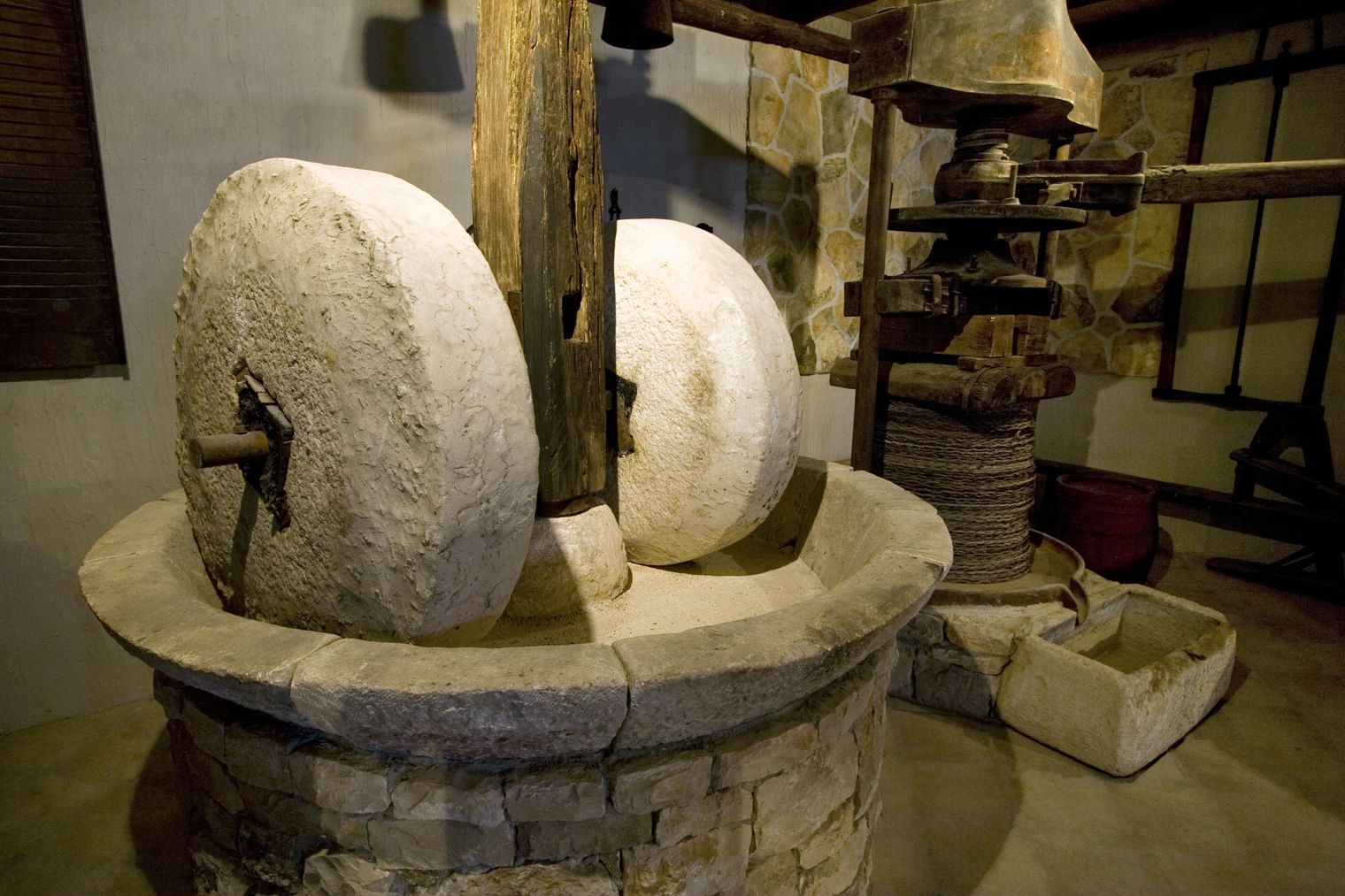 Cold Pressed Olive Oil: What Does it Mean?

"First cold press" shows up on many bottles of extra virgin olive oil. What does it actually mean, and is it important? Let's press onwards, shall we?

For openers, we have to look at how olive oil is made. At its most basic, it consists of two steps: grinding up the olive fruit (pits and all) to a paste, and separating the oil from that mixture of pulp, pits and the water contained in the olive flesh. These days the process includes some additional steps and lots of fancy gear, but the fundamentals are still grind and separate.

An historical look at olive oil production explains a lot. The grinding part of making olive oil was done for millennia using heavy stone wheels. The stone mills were driven by people or animals initially, but eventually various types of engines and motors took over. Modern mills have mostly ditched the stones in favor of various kinds of steel grinders (hammer, blade or disk mills) that are cleaner, more efficient, continuous, etc. Better all around.

The separation part of olive oil production was traditionally done in two steps. The first step was separating liquid (oil and water) from solids (pits, skins and pulp). This is where the "press" part comes in—eureka! The paste ground on the stone mill was spread onto woven mats, traditionally made from various materials such as esparto grass, goat hair or coconut fiber but more recently from plastics, and these were stacked up and squeezed to force out the liquids: oil and water.

This method of pressing mats spread with olive paste was the basic liquid-from-solids separation technique for, again, millennia. The source of the pressure evolved, from a simple lever to a wooden screw, and eventually, to a hydraulic press. The use of hydraulic presses to perform this liquid-from-solids separation was the only option until 1962 when the first centrifugal decanter was installed in the Santa Téa olive oil mill in Tuscany, Italy. Since then, using a horizontal centrifuge for separating out the solids has become the standard.

The second stage of separation, oil-from-water, was done for thousands of years with gravity. If you let the mixture of olive oil and water pressed from the fruit sit, gravity will do its thing and the oil will float to the top. This is slow, so in the early 20th Century, olive oil producers started to use a modified cream separator—a disc centrifuge—to separate the two liquids by density.

Hydraulic presses, with synthetic mats, are still in use today, but becoming less and less common. This is a good thing for high quality EVOO production; it's very difficult to produce the best olive oil using mats. The reason is simple: they are almost impossible to keep clean. Imagine rubbing a mixture of olive oil and tapenade into your doormat and then trying to clean it thoroughly. The residue of old oil and fermenting paste can cause all kinds of flavor defects. But to be fair, if you have clean new mats and meticulous mitigation practices—keeping the mats in the freezer overnight, for instance, to slow oxidation and fermentation—it is possible to produce extra virgin olive oil on a traditional mat press.

So what does first cold press mean on your olive oil label? In the US, not much, since it is an unregulated marketing term. In Europe, however, it does have meaning. There is an EC labeling regulation that states: ‘first cold pressing’ may appear only for virgin or extra virgin olive oils obtained at a temperature below 27 °C (80.6 ºF) from a first mechanical pressing of the olive paste by a traditional extraction system using hydraulic presses.

A more modern version of "first cold press" is "first cold extraction," a term that describes modern oils that are made using a centrifuge. Again, the EC defines "cold" as below 27 ºC (80.6 ºF). There is nothing magical about this temperature—and most high quality producers work at lower temperatures—but it is generally regarded as the upper limit for processing extra virgin olive oil. High heat will increase the amount of oil you extract, but lower the quality. So that's where the "cold" comes from (although 80 ºF is no one's idea of cold when you are talking about the weather!).

So does a second press even exist? Definitely not if you are producing extra virgin olive oil. The top grade of virgin olive oil, extra virgin, requires fresh olives as the starting point, so it's redundant to specify "first press;" all extra virgin olive oil has to be from the "first press," and under 80.6 ºF, i.e. "cold." But there is some oil left in the pomace (the skins, pits and pulp left after the oil has been extracted). If you mix the pomace with hot water or heat it up in a malaxer, it is possible to extract more oil, but of a lower quality. Usually second extraction olive oil comes out as lampante grade because of high free acidity and wax content, so it goes off to be refined. Second extraction is not a universal practice but in countries that make a lot of olive oil such as those around the Mediterranean, it makes sense to recover the oil from the pomace. Another option is to send the pomace to a factory that will extract the remaining oil using hexane—just like with canola oil or other vegetable oils—to produce a product called olive pomace oil.

And this all means...

If you are looking for a flavorful product with the most health benefits, the most antioxidants and a peppery finish thanks to polyphenols, just look for "extra virgin olive oil" and forget about "first cold press." But don't punish a producer for putting it on their label either; many American consumers still haven't gotten the memo and think "first cold press" is important so brands continue to use it for marketing reasons.

If you are looking for high quality EVOO, be prepared to pay more and to do a little label reading and taste testing. Our tips on buying olive oil will help, and you can check out our olive oil reviews for some grocery store guidelines. If you're on a budget, you might opt for two olive oils: a cooking oil and a "finishing" oil. A less expensive extra virgin olive oil for sautéing, roasting and marinades can make sense so you can spend more on your EVOO for drizzling, dipping and salad dressing.