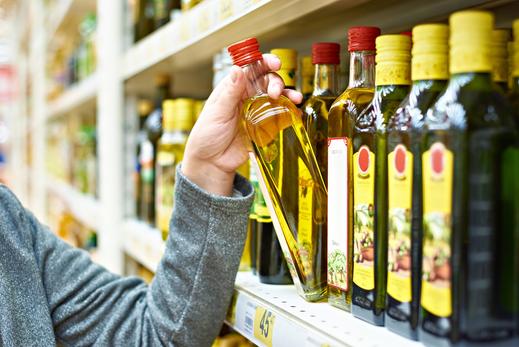 What Is the Best Olive Oil For Frying?

You may have heard rumors that olive oil is not good for frying, especially if you're using high heat. It’s time to bust that myth. Olive oil can be a great choice for frying – it’s about choosing the right olive oil for the job. (They’ve been doing it in the Mediterranean in places like Greece and Italy for centuries!).  That’s where we come in.

Not only do olive oils have different flavors, they also have different smoke points depending on the extraction process, which affects how high you can crank up the heat. Here’s your guide to frying with olive oil.

Why Is Frying Oil Important?

All oils and cooking fats (butter included) have a “smoke point.” An oil's smoke point is the high temperature at which an oil starts to break down and form free radicals, which are unhealthy compounds. Not only are they unhealthy, they also impart a bitter or even rancid taste to your fried foods. You’ll know when you’ve hit the smoke point – you’ll smell smoke. Hopefully your fire alarm isn’t too sensitive!

Olive oils have a relatively high smoke point of 350° to 410° F. It may come as a surprise that this is an even higher smoke point than butter, which clocks in at 302°F.

When it comes to smoke points, there’s an easy trick to remember: refined oils have a higher smoking point than types of olive oil that are unrefined, so they're a little more versatile when it comes to frying. We’ll take a look at how olive oil measures up below, and highlight some of the best olive oils for frying.

Pan frying is a technique that uses about ⅓ of an inch of oil or more in the pan, but the food is not entirely submerged in the oil (that’s deep frying). It's also not the same thing as sautéing or stir frying, as these methods have different oil and heat requirements.

When pan frying, the key is getting the oil to the right temperature. You’ll want the oil to be hot enough that it sizzles, but not too hot, otherwise the food becomes brown before the interior can finish cooking. The sweet spot is about 375° F. As the smoke point of olive oil ranges from 350° to 410° F, some olive oils can do the job.

Regular olive oil has a higher smoke point than EVOO and virgin olive oil, which makes it a good choice for pan frying. Here’s why:

Another good choice for pan frying is light olive oil. While this sounds like a low-calorie option, that’s not actually the case.

EVOO can certainly be used for pan frying, as long as you keep the temperature at medium. As the flavors of olive oil can degrade when heated, it’s best to cook quickly when pan frying with EVOO. If you’re making something simple – like Bon Appetit’s favorite crispy fried egg – the flavors should hold up.

Can you deep fry with olive oil? Absolutely! Do you want to? Well, that’s up to you. Deep frying requires a lot of oil, which is why many cooks prefer to use inexpensive oils for the job, like vegetable oil or canola oil, which have a high smoke point, and they save their best oils for things like drizzling and salad dressings like vinaigrettes. However, cheaper olive oils like regular olive oil and light olive oil are up to the task. Save your fancy Italian EVOO for something else.

Speaking of smoke points, that’s another consideration. If you’re using a deep fryer, you can set the temperature at around 340° - 380° F. That way, it won’t reach the smoke point of the olive oil. Here’s how to choose the right olive oil for deep frying.

Thanks to its lower price and high smoke point, light olive oil may be the best olive oil for deep frying. Its neutral flavor means it won’t impart much olivey goodness to your dish, but it will be healthier than most other cooking oils.

That with a grain of salt! Deep frying is not the healthiest cooking method, as it adds a lot of calories and fat content. But olive oil is one of the healthiest fats to use because of its monounsaturated fats. In a 2010 study, olive oil was able to be kept in a deep fryer for over 24 hours before it became overly oxidized.

Like light olive oil, regular olive oil is made up of mostly refined olive oil, with only 15-20% virgin olive oil. As such, it has a higher smoke point and a lower price point, making it a good choice for deep frying.

While it is possible to deep fry with extra virgin olive oil, we don’t recommend it. EVOO is the most high-quality olive oil, prized for its nuanced flavors and acidity. However, the flavors and aromas of olive oil degrade when heated for a long period of time. As such, deep frying is just a waste of good EVOO.

Does deep frying at home sound overwhelming? It’s easier than it sounds. Here are a few tips for getting started: